Cute little girl playing in the summer field of wheat

This is dedicated to my daughter Bridget, who walked out of her high school class today to protest government inaction on climate change. Many of our problems, including climate change, can only be solved with one-child families.

No Matter Our Cause, It’s a Lost Cause Unless We Reduce Our Population.

If families had one child to none, human population would fall from 7.6 billion to 1 billion in 100 years. The ideal population of the America’s may be its pre-Columbian level of about 100 million or reduced by about 100x from today.

With One-Child Families, Population Drops From 7.6 to 1 Billion in 100 Years.

Many of our greatest challenges: poverty, scarcity, disease, wild ecosystem loss, resource wars, climate change will only be resolved by reducing human population to 1 billion. Think about that for a moment. There is no way to solve these problems without significantly reducing human population. Politicians can ameliorate them for a few years, but never solve. These threats will only get worse for our children.

These are students walking out of Ashland High School in Ashland, Oregon on September 20, 2019, to protest government inaction on climate change. They know it’s their future. Our generation has let them down. Teens are beginning to refuse to have children until action is taken on climate change.[1] 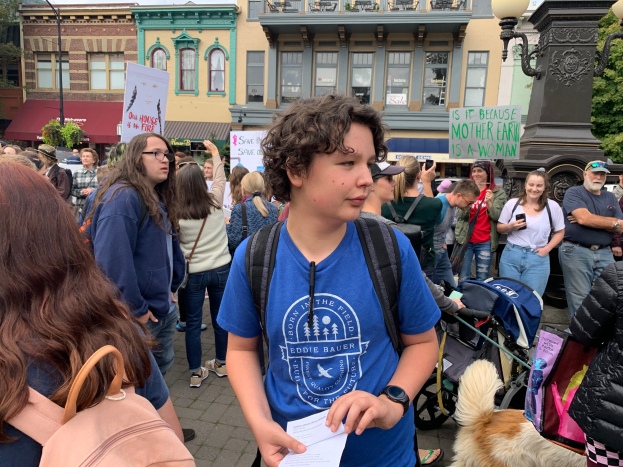 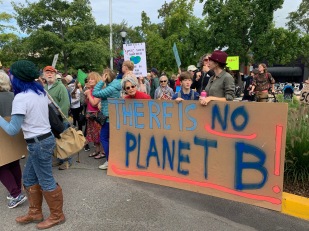 One-child families reduces population naturally without calamity. Wild nature would be released from the choke-hold of much human exploitation. There would be a lot more to go around for everyone. With a lower population, recycling of housing alone would save untold millions of acres from clear-cutting. Water and air would be cleaner. Forests, prairies and oceans would heal. Biodiversity would return. The planet and all life would be healthier.

Reality would set in if families were allotted fixed housing space and resources for ourselves and all of our decedents. The more children we have, the more crowded our homes become and the less there is to go around.

The fixed home size we all share is called Earth. We share it with all forms of life. We have far exceeded a sustainable population level and are now in a drawdown spiral mining accumulated surpluses such as topsoil and oil. Both are equally valuable and end in the same three letters. It is ironic that we use oil to destroy topsoil.

We could all drive Cadillacs with wings if there were only 1 billion of us. Connect the dots. Families of more than one cause overpopulation. Large populations demand greater resources including cutting the old-growth forests, plowing the perennial prairies and emptying the fisheries. Dead oceans, missing forests and prairies, plus urbanization, cause radiating hot spots. Deforested and urban land is 10-14˚F (6–8˚C) warmer than old-growth forests or prairies they replaced. Multiply the percent of Earth that has been deforested, farmed and urbanized times this increase and you get the 1–2˚F temperature rise.[2]

The greatest driver of climate change is deforestation, not greenhouse gas emissions. The coincidence of rising CO2 levels and temperatures does not prove causality. It just means they happened at the same time. If our children have 15 percent of the population we do now, they will have 87 percent less pollution.

God Had a One-Child Family

If you’re a Christian, god had only one child. According to the scriptures, Jesus did not have five siblings. For that matter, there is only one God in Abrahamic religions, so even God came a one-child family.

By What Right? By All Rights

Honestly, giving back 80 percent or more of what we have taken from the wild and defenseless other species is not enough. Civilization has swept across this Earth like a atomic bomb killing every other species in its path. Species scream in agony when they are crushed, burned, buried or slaughtered by the industrial consumption machine.

Wild species have an inalienable right to exist unfettered without fear of destruction simply by their own existence and evolutionary survival through today. Our single species has no right to have taken what we have from others. We invented a fake god to tell us it was alright to leave the garden. Religions have always been institutions to support civilization.

Civilized humans, especially entitled Americans, will throw their hands in the air exclaiming their right to have more than one child. “By god it is our right.” It might have been OK in the past, but we are past the point where we have become destructive.

This shows civilization’s lack of empathy. Many Americans believe that we are entitled by this thing called freedom or dominion to do and exploit as we wish. Americans have been taught for generations that we have a Manifest Destiny to exploit this land. Americans, and most civilized people, believe that they have every right to run in the back yard with a chain saw and have at it.

Humans do not have brains, conscience or souls; we have egos.

We have not been honest with our own children. American history should start with the truth: That America is based on the catastrophic genocide of almost as many indigenous peoples as all those who died in World Wars I and II combined. World War I saw the death of 19 million or about 1.8 percent of the population.[3] In World war II about 78 million or 3.5 percent of the population died.[4] Manifest destiny caused the death of about 90 million Native Americans or 90 percent of the total population dying from disease, starvation or murder.[5] Indigenous Americans are the only peoples who know how to live in harmony with Earth.

The Americas are also built on slavery of African peoples. From 1620 to 1866, 12 million African slaves were kidnapped and forcibly shipped to the Americas.[6] Almost all of the natural wild landscape has been destroyed. Today, few people alive know what the world really looks like. The last old-growth forests are burning in Brazil and being logged in Alaska and Canada for the sole profit of a new men that will soon be dead anyway. Our children are unaware of these truths. But they know they have been lied to in their bones.

The older I grow, the more I see through concepts of freedom and liberty. Freedom’s fatal flaw is that it is a one-sided coin: “I can do as I wish regardless of the externalized costs.” Hypocrisy today is Americans taking gratitude for a Thanksgiving meal provided by migrant workers wage-slaving under the constant threat of deportation. How civilized is this? Very.

Freedom’s fatal flaw is that it is a one-sided coin.

Humans Themselves Are Not The Problem

Civilization forces humans to destroy Earth to make a living. Civilization is not the crowning achievement of man. Civilization is the greatest destructive force Earth has ever known. For everything we make, we have to take. We have become the locusts we fear.

When we fly at night and see the lights below, what we see is the Earth afire. When we see satellite images of cities and agricultural areas we see the metastasized cancer of civilization. Cities and suburbs are just normal; it is just the way it should be.

How wretched is the man who cares only for man.

A pre-Columbian satellite images would show old-growth forests and perennial prairies from sea to thriving sea — with a population of 100 million Indigenous Americans. Today, the great agricultural squares are devoid of even most soil life part of every year. In nature, when top soil is exposed, it is an emergency. Civilization creates a twisted-mind where death of non-human, non-domesticated life is normal. How wretched is the man who cares only for man?

Like they were in China until 2016, one-child families will have to be mandatory globally. Chinese economists convinced leaders that larger families are required to expand the economy. In the end, larger families will destroy China. Even today, China, like the United States, must pull resources from around the world to meet the needs of its current population level — let alone an even more unsustainable larger population. A world in population overshoot, beyond Earth’s natural carrying capacity, is an ever taller house of cards waiting to come down.

Incentives should be aligned with requirements. Pay couples $10,000 or more each to have a vasectomy and be tied after their first child. Pay an individual maybe $20,000 to be sterilized before having children after the age of 25. These amounts are a fraction of the total social costs of supporting one person through age 18.

Take the example of how incentives keep the blockchains secure. At a high level, it is too expensive to buy 51 percent of the Bitcoin mining hash power to change the ledger. So no one does it.

Economic incentives create behavior. Pressure for quarterly business profits force exploitation. However, if corporations had no political personhood, and had to equally balance the needs of their communities, employees, customers and related wildlands, we would have a more benign economy today.

We need a one-child carrot and stick policy. The law is the stick and the incentives are the carrot. We can’t change the past; we can only change the future.

For One-Child to become widely publicly supported, a shift must first occur. First, it must be publicly accepted that large families reduce the quality of life for all human and non-human species. Second, the choice to have children is a base desire of the parents. Once these are accepted, then it is possible for the public to support the idea that quality of life is a right of the child.

Quality of life is a right of the child. Having a large family is a base desire of the parents and is second to the child’s right to quality of life.

Therefore, the Constitution must be amended to guarantee quality of life to every child by limiting parents to one child for the benefit of the child and of all life.

For lower human population levels to stick, it is going to take the human awakening for which we have all been waiting. Expanded empathy for all life will have to re-enter the human consciousness.

Indigenous peoples fought to the death to protect the wild because they depended on it for their livelihood. Civilized humans depended on a domesticated landscape for theirs. We have to re-indigenize civilized man to save the world. We have to realize we do depend on wild species for our survival and we must give back 80 percent or more of what we have taken.

Animism believes in the fire of all life. When I die, I return myself to the fire of life.

Biologist E.O. Wilson calls this Biophilia, where humans possess an innate tendency to seek connections with other forms of life. Not only does, “our existence depend on … this propensity,” he argues, but “our spirit is woven from it, hope rises on its currents.” The wonder of life is a sustaining wonder, natural and necessary to our beings.[7]

[1] John Bacon, USA Today: No future, no children: Teens refusing to have kids until there’s action on climate change. September 19, 2019.

[21] Read More: Deforestation: The Real Cause of Climate Change.

[5] Wikipedia: Indigenous peoples of the Americas.

[6] Wikipedia: Slavery in the United States.