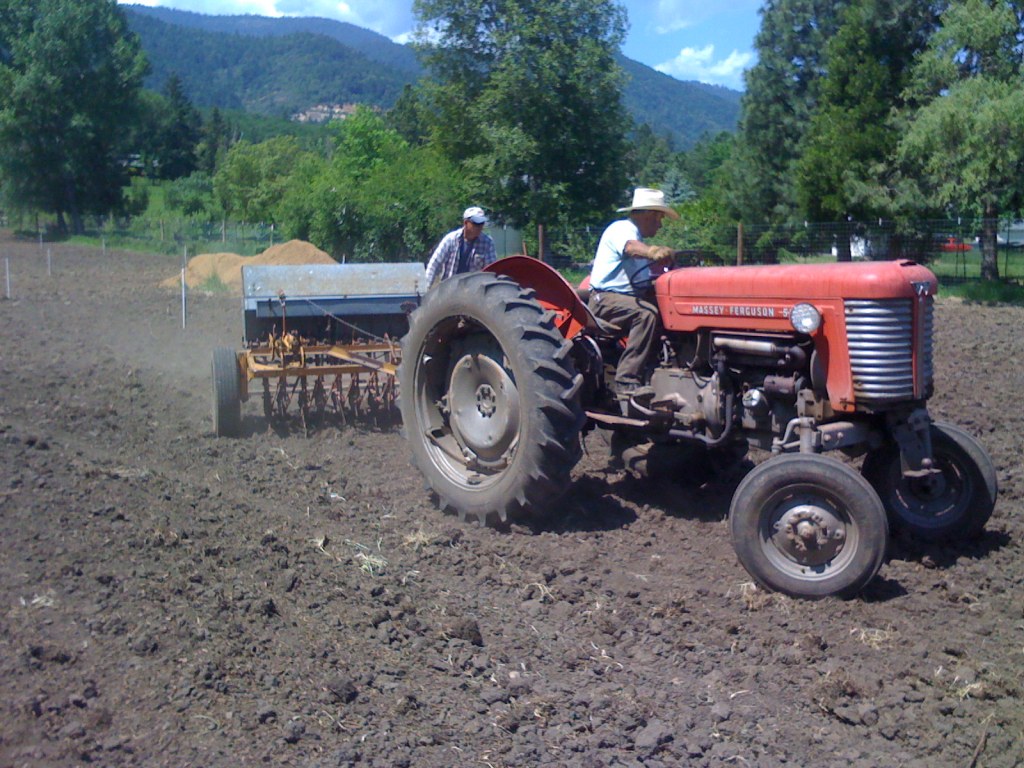 Fuel. Industrial farming is over when cheap oil is. On a large-scale, we cannot till, sow and harvest fields with electric tractors. Running a tractor is like driving an SUV uphill towing a motorhome. This requires more BTUs of energy than can be stored in batteries. For example, a Ford F150 truck can pull a motorhome up a mountain for 100 miles. The latest Tesla SUV can’t; it can only drive itself up the hill without towing anything.[1]

A fleet of charged electric semi trucks might be able to run a grocery supply chain. The question is, how do you charge the truck fleet and warehouse refrigeration without oil? The amount of solar panels and wind turbines required for just grocery transportation and warehousing does not exist. What we have today is already spoken for. Remember, we will not have the natural gas or oil in the future to run generators to charge batteries. Uranium will also run out. Lastly, the range of proposed nonexistent semi trucks is only 500 miles max.

Soil. Industrial farming is a topsoil mining and biodiversity destruction system. Rich, loamy, black topsoil was built up over millennia by old-growth forests and prairies will be lost in two centuries. About half of original topsoil has been lost since 1900. A third of Midwestern farms today have no topsoil left at all.[2] What is left in these cases is erosion-prone, dead mineral matter, brown dirt. Topsoil is a living thing; dirt is not. The soil web of life, soil seed bank, mycelia network, insects and animals are lost by repeated tilling and exposing the soil to direct sunlight. This web is needed to keep the soil and the life that grows on it alive.

We cannot understand soil, but we can become it.

— Larry Korn. Translator of The One Straw Revolution and my Permaculture Co-Teacher.

Ecosystem. The problem is that, once farmland is exhausted and goes out of production, what originally grew there before farming can no longer grow. Think: Middle East, Africa, Eastern Europe, etc. Where once an old-growth temperate or rain forests grew in rich living loamy soil, now only sage or creosote bush will grow. Not only is the top soil gone but the entire ecosystem of life is missing and cannot grow there because the climate has changed. Farming and grazing turn forests and prairies into deserts.

Civilization leaves deserts in its footsteps.

I can already see the deforestation process in Oregon now. For example, near Roseburg, only grass and oak savanna will grow because large timber mills have demolished the once old-growth and regrowth forest over decades.

Civilized humans are so programmed and dependent on domesticated food we beat ecosystems into dust. We log old-growth forests, then tree-farm, then farm, then graze. Ranchers will even graze the desert until almost nothing is left, then walk away from the destruction. Midwest farmers dump billions of pounds of nutrients, herbicides, and pesticides on the ground every year permanently poisoning the soil and drinking water. Think how bad it will be in 80 more years.

Rain. The problem is that all life needs what only old-growth forests provided in large quantities, rain, oxygen, shade, and moist loamy soil. Cut the old-growth and the rain goes away, carbon in the atmosphere increases, and the planet warms because shade has been removed. Deforestation is causing climate change, not greenhouse gases. Drought today is caused by our removal of the old-growth forests in the past.

Ground Water. In high plains states of Texas and Kansas, many farmers in the region rely on the Ogallala aquifer to supply as much as 90 percent of their irrigation. Water demand has however, outstripped supply in recent years. Texas and Kansas reached peak grain production in 2016. Grain yields in the two High Plains states have been declining over the last four years. By 2050, grain production in Texas could decline as much as 40 percent.[3]

Climate. The climate we have today will be gone by 2100. I am really afraid to say that we probably would not recognize the climate and landscape by 2100. The weather change is accelerating. In just the 10 years I farmed in Ashland, Oregon, the growing season changed by two months! We used to have to transplant frost-tender tomatoes, peppers, and squash after June 1 and harvest most by September 30. The growing season has now expanded to May 1 through October 30 or later. This is shocking.

How do I know. I was an organic seed farmer for 10 years. Plow a virgin field and watch. See the bank die with each successive annual tilling from prairie: to grass, to yellow dock, to purslane, to plantain, to vetch and star thistle, to dead soil.

When we expose soil to sunlight, it is an emergency for Nature. Nature has to bring out anything she has left to save the soil web of life. In many cases, plants bring their own fertility because the soil is depleted. For example, vetch and lupine are nitrogen fixers, pulling nitrogen out of the air and releasing it into the soil on root nodules. However, domesticated crops drain soil nutrients. Prairies, forests and even deserts once built nutrients and biodiversity. Nature takes a species out of the food-chain when it no longer builds topsoil. Humans may be next, if we do not rapidly and drastically reduce our numbers. Nature can heal herself but we have to get out of the way, and stop interrupting Nature’s succession. However, the species extinction and ecosystem destruction civilization causes will take millions of years to replace.

Farming 2100. Large-scale farming requires everything industry cannot make: oil, soil, water, and life. There will be pockets of farming that had deeper soils near smaller cities in 2100. But, not the large-scale, long-distance, diverse grocery supply chain we enjoy today.

If You Don’t Believe Me: A Thought Problem

Here is a small scale thought problem to help illustrate the point.

Image that you have to support your family of four plus a partner for your oldest child, on a fixed 10 acres. You can build a home, barn, greenhouse, tractor, and energy system, but cannot stockpile food or feed. You have a year to prepare, start crops, plant orchard, livestock. You are an experienced organic farmer.

How long can you survive? Here is what is going to happen over the first 3-5 years:

If you brought large domestic animals, they will have grazed off what land you set aside for them in a few months and you will have to eat them. The land they grazed will be denuded, compacted, and more difficult to farm and of little use to wildlife for many years.

Poultry will be your remaining source of protein. You grow a little beans and quinoa, but there is not much to go around for five people. A stream runs through your property, but it is dammed down below preventing fish from swimming up.

You’re finding out over time, that keeping the weeds back by hand is constant work. You would like to spray herbicide but you have a shallow 50′ well. You have to let the poultry free range now because you cannot grow enough feed for them. They start to denude the landscape and are picked off by predators or you eat them. Heating fuel is starting to become a concern even though you built an efficient masonry stove.

You and your partner plus the younger partner each have a baby. There are now seven mouths to feed but the land size is fixed.

You start to notice that the family on the 10 acres up stream is dumping something into the stream, and you can no longer drink the water.

Another problem is starting to arise. You have tried saving seed but the plants that are regrown do not match the phenotype, yield and disease resistance of the original plants. You learn that you made the mistake of planting hybrid and GMO seeds which cannot be saved because they are not open pollinated and do not contain the complete genetics as heirloom seeds once did. Monsanto also sues you because you saved GMO seed that they own the patent for.

Your youngest child starts dating the boy next door and he comes to live with you and they want to build their own house. Now there are eight mouths to feed. Everyone is getting thinner and the land is falling apart.

The growing season is expanding but so is the hot season, which now requires more irrigation. Strong fall winds blow from the south. A wildfire spares your house, but burns your woodlot. Nearly all wildlife has left your 10 acres. Irrigation was shutoff two months early.

You see where the story is going. A growing number of people cannot survive on fixed acreage. Human farming use runs land down. We end up destroying the ecosystem. The whole system eventually fails.

Multiply the eight people times a billion and you get human population. The status of the world today is: holding on by a thread are wild biodiverse forests, prairies, oceans, rivers, lakes. Civilization sees no value of wildlife beyond sport, recreation or curiosity. Over-domestication is running industrial lands and waters down. We have 30 years of good oil supply left[4]. Plus, we cannot make a solar panel without fossil fuels. I’m nearly 60. That means if we had today’s oil supply when I was 30 in 1992, we would running out of cheap oil today – that fast. And you thought COVID-19 was your biggest problem.

Buy only open-pollinated savable seeds from small family seed companies like restorationseeds.com. Never buy a hybrid seed; you can’t save them. Learn how to save seeds. Live in community. Have a small one-child family.

Image: Our farm. 2009. Should have never plowed that field. Shown, my good friends Marvin and Charlie.