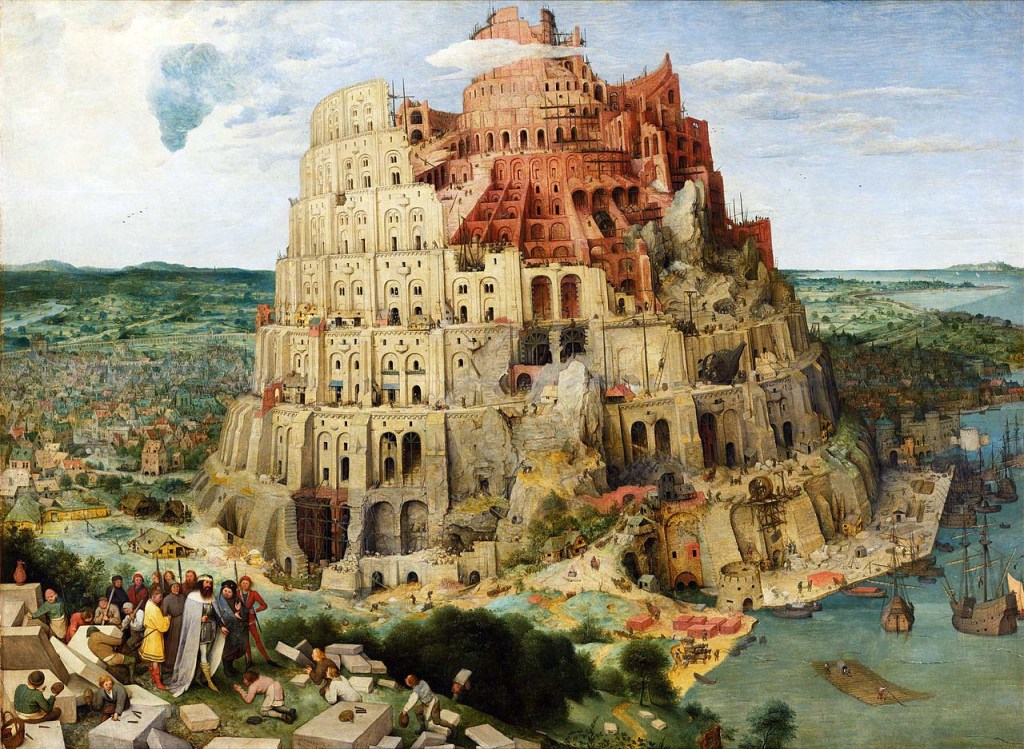 At first glance the lesson of the Tower of Babel story is if everyone is not coordinated, the tower cannot be built. There is a bigger lesson to be learned.

Tower of Babel story is a Near Eastern myth recorded in the book of Genesis to explain the origin of different languages. According to the story, a united humanity of the generations following the Great Flood, speaking a single language agreed to build a city in the land of Shinar and a tower tall enough to reach heaven. Seeing this, God confounded their speech so that they could no longer understand each other and scattered them around the world.

A footnote to this story is that religions are created to reinforce society. Abrahamic mono-theistic religions reinforce civilization. They advocate human dominion over all other species and one god erasing a galaxy of tribal spiritual beliefs.

Culture is a social organization system. The Achilles Heal of humanity is that we can be programmed fully and issue commands to other humans. The lynch pin of culture is that it can be organized with an intent. It is the intent, mission or meme of a culture that matters. Our culture’s mission is: Civilization Must Continue at All Costs. In contemporary society, this means in the form of modern for-profit exploitation capitalism.

All animals can be programmed to some extent, think pets. But humans entire lifestyle and thought process can be domesticated. There is a reason president George Bush created the No Child Left Behind Act 2001. It really means, No Child Left Un-programmed. Modern children are organized by manufacture date and taught reading, writing and arithmetic because it is the best operating system to download programming rules into humans.

It is not so much that we civilized humans are organized and the wide diversity of tribal culture has largely been erased from human memory, it is that societies’ common meme to domesticate the entire world from crops to civil society. If a small portion of human society wanted to domesticate the wild, that would be fine. But since all of society wants to domesticate all of the wild, it means disaster wild species, ecosystems and eventually our future children.

Locking Up Your Life

Today it appears we are locked into a domesticated future. Almost all of modern society has no skills to cope in a wild landscape or in deep community. Our skills to operate in permanent tribal groups has almost completely atrophied. We are emotionally dependent on physical and social mobility. No permanent place is home for ourselves and our forbearers since time immemorial. We also lack access to resources and the commons to earn a livelihood in harmony with the wild. Private property and domestication has locked up the food and shelter.

What we call a government is a monopoly control system of endless foolish decisions made by clueless ego maniacs. If you are not enlightened to see modern society as a bad cartoon, you have no choice but slavery.

We need reservations for civilized people to opt out of domestication. The government won’t create them for us so we have to do it ourselves.

Everything we take as the hallmarks of modern society and civilization has to be tossed out and reinvented to be inharmony with the wild.

Any land our communities inhabit must increase in biodiversity, cultural diversity and top soil.

New society must Tend The Wild not domesticate her. We must regain the skills to obtain our food and shelter from our local wild and not just look at the forest as a clear cut for the economy. Start with a Permaculture Design Certificate (PDC) and primitive skills courses. Learn how to build a cob or other natural built home mortgage free. Learn how to get along with others long-term.

Start with a small core group, identify what you stand for, make it clear and stick to it. Create a new old way of being. Live Beloved, Bhakti Fest, Country Fair, Common Ground or Burning Man every day of the year.

Sell your homes, leave your job and rental and go into a community together with dear like minded friends. Look for people with skills not money. Have a meeting to have no more meetings. End wage slavery and tyranny of the democratic majority. Plan for your health care, youth care and aged care and new spirituality. Organize to be new, different, novel and disorganized. Dedicate a lifetime to indigenize yourself. Live your truth, build no towers.

Share these ideas person-to-person. Don’t just read these essays and close the page. Post links to essays that resonate with you, on your social media. Our speech is not free if dissenting messages are hidden by search engines, and mainstream media. You found these ideas, now share them with others!

[Image] The Tower of Babel by Pieter Bruegel the Elder (1563)